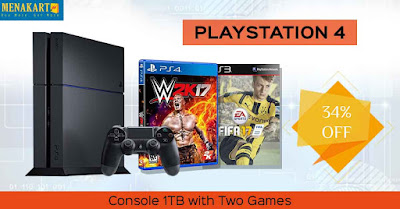 The much awaited PlayStation 4 offers dynamic, connected gaming, along with high end graphics and speed, intelligent personalization. What it is also packed with is deeply integrated social capabilities, and innovative second-screen features. Fusing unparalleled content, immersive gaming experiences, all your favorite digital entertainment apps, and PlayStation exclusives, the PS4 focuses on all the needs a gamer can have.

The PlayStation 4 ensures that even the very best games and the most immersive experiences are offered on this ingenious platform. The PS4 system allows the greatest game developers in the gaming world to unleash their creativity and push the boundaries of game design through a system that has been specifically tuned to their needs. The PS4 system has been built around a powerful custom chip that has eight x86-64 cores and the 1.84 TFLOPS graphics processor with 8 GB of ultra-fast GDDR5 unified system memory. These heavy duty features ease game creation and enhance the richness of all supported content. What you get is rich, high-fidelity graphics and and immersive home entertainment experiences.

The PS4’s DUALSHOCK 4 controller delivers new innovations for more immersive gaming. These include a highly sensitive six-axis sensor along with a touch pad that is located on the top of the controller. What the user is offered are completely new ways to play games and interact with AI. The controller also has the new SHARE button that lets users engage in video streaming and sharing.

You can now engage in endless challenges and quests with your community and even share your epic achievements with just a press of a button. All you need to do is simply hit the SHARE button on the controller, look through the last few minutes of gameplay, tag the same and return to the game. Your video will be uploaded as you play! The PS4 further enhances your social reach by letting you broadcast your gameplay in real-time.

Powered by Frostbite: One of the industry's leading game engines, Frostbite delivers authentic, true-to-life action, takes players to new football worlds, and introduces fans to characters full of depth and emotion in FIFA 17.

The Journey: For the first time ever in FIFA, live your story on and off the pitch as the Premier League's next rising star, Alex Hunter. Play on any club in the premier league, for authentic managers and alongside some of the best players on the planet. Experience brand new worlds in FIFA 17, all while navigating your way through the emotional highs and lows of The Journey.

The Journey: For the first time ever in FIFA, live your story on and off the pitch as the Premier League’s next rising star, Alex Hunter. Play on any club in the premier league, for authentic managers and alongside some of the best players on the planet. Experience brand new worlds in FIFA 17, all while navigating your way through the emotional highs and lows of The Journey.

Introducing Alex Hunter: A touted prospect, Alex Hunter is on a journey to make his mark in the Premier League. Emerging as one of the best young prospects in the academy, the expectations are high and the opportunity is there for Alex to perform on the world's biggest stage. Will you deliver?

Your Performance. Your Decisions. Your Unique Story.: In The Journey, Alex Hunter’s Premier League career is impacted by your performance on the pitch, and the decisions you make off of it. Make critical decisions throughout the game that will change what happens next and how other characters react to you. Will you put your team first before your own success? The choice is yours.
Authentic Storylines: The Journey will pull you through a true-to-life experience in the Premier League. It's a cinematic world informed and influenced by real players, personalities, locations, and events that take you places you've never been and bring you experiences only available in FIFA 17.

Immersive Gameplay & More: Experience the most authentic WWE gameplay ever, featuring thousands of new moves and animations, backstage and in-arena brawling, and the biggest roster of WWE and NXT Superstars and Legends to date.

Powerful Creation Suite: Create and develop your custom WWE Universe with the deepest Creation Suite to date, featuring new options such as Create a Video, Create a Victory and a Highlight Replay system. New features and additional content allow you to customize the most amazing Superstars, Arenas, and Championships.

MyCAREER and WWE Universe with New Promo Engine: The all-new Promo Engine brings the drama and personality of the WWE Superstars to life in MyCAREER and WWE Universe modes. Choose your words wisely and smack talk your opponents, start rivalries or form alliances. Your dialogue will shape your characters as they rise through the ranks of NXT and WWE to become WWE Hall of Famers!

Coming off the heels of WWE 2K16, which earned critical press and fan acclaim - including an 8.8 out of 10 from IGN.com, WWE 2K17 arrives as the reigning and defending flagship WWE video game franchise champion with stunning graphics, ultra-authentic gameplay and a massive roster of WWE and NXT's popular Superstars and Legends.

October 25, 2017
Menakart - Your One Stop Online Shopping Site in UAE These days people find lesser and lesser time for home. People are busy with work, at office, both men and women. This is primarily the reason for the surge in online shopping dubai , online shopping, online shopping abu dhabi , and online shopping bahrain. Women too these days, even if they are not working are all busy looking after kids or working from home. This leaves people with meagre time for shopping for small things that one requires at home on a daily basis. But other than the lack of time there are other reasons that online shopping has taken over visits to malls? There are a few to name,  Saves Time Travelling to the mall, facing traffic while coming and back forth from the mall and home just to buy a juicer blender for some small kitchen cooking work? Doesn't sound right, correct? Online shopping saves time and the effort to run around in the mall. Just sitting at home on the couch after work you can order
45 comments
Read more