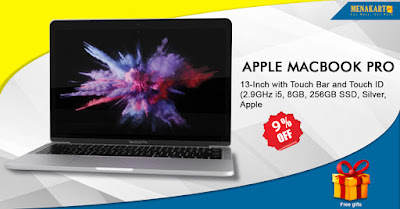 
It’s faster and more powerful than before, yet remarkably thinner and lighter. It has the brightest, most colorful Mac notebook display ever. And it introduces the Touch Bar — a Multi-Touch enabled strip of glass built into the keyboard for instant access to the tools you want, right when you want them. The new MacBook Pro is built on groundbreaking ideas. And it’s ready for yours.
Up to 130% faster graphics
67% brighter display
Up to 17% thinner
The Touch Bar replaces the function keys that have long occupied the top of your keyboard with something much more versatile and capable.2 It changes automatically based on what you’re doing to show you relevant tools you already know how to use — system controls like volume and brightness, interactive ways to adjust or browse through content, intelligent typing features like emoji and predictive text, and more. And for the first time, Touch ID is available on a Mac, enabling instant access to logins and fast, secure online purchases with Apple Pay.
EVEN MORE WAYS THE TOUCH BAR GIVES YOU QUICK ACCESS TO COMMANDS.
Expand, contract, and customize system controls to reveal volume, brightness, and more.
Answer your iPhone or a FaceTime call from the keyboard without moving your cursor.
Select a palette and tap to choose a color for text or objects in Pages, Keynote, and more.
Get quick access to text suggestions and emoji in apps like Messages and Mail.
Access the function keys by holding down the FN key on the keyboard.
Touch ID arrives on Mac.
Now you can unlock your Mac in an instant. Use Apple Pay to make secure online purchases. Quickly access system settings and locked notes. And even switch between users — all with the touch of a finger.
For your favorite apps and those to come.
The Touch Bar can change how you experience the apps you use every day — including third-party apps. It’s a dynamic canvas that developers can use to add a new dimension to existing and future apps.
The new MacBook Pro elevates the notebook to a whole new level of performance and portability. Wherever your ideas take you, you’ll get there faster than ever with cutting-edge graphics, high-performance processors, state-of-the-art storage, and more.
130%Up to 130% faster graphics
Up to 3.8GHz Turbo Boost processing
100%Up to 100% faster flash storage
Up to 10 hours of battery life
Graphics performance up to twice as fast.
The 15-inch MacBook Pro features a powerful Radeon Pro discrete GPU in every configuration, delivering up to 130 percent faster graphics performance than the previous generation.1 Manufactured with a cutting-edge 14 nm process, Radeon Pro graphics deliver up to 2.5x more computing power per watt. And with 64MB of embedded DRAM, the 13-inch model provides up to 103 percent faster integrated graphics than the previous generation.5 That means more time for what matters most — creating amazing work.
Edit multicam projects in Final Cut Pro X with up to 3 streams of full-resolution 4K video on the 15-inch MacBook Pro — with render speeds up to 57 percent faster.
Render 3D models faster in Autodesk Maya 2017 — with up to 130% better real-time performance than the previous-generation 15-inch MacBook Pro.
Play a graphics-intensive game like Tomb Raider on the 13-inch MacBook Pro with up to two times faster performance than the previous generation.
FASTER FLASH STORAGE.SNAP TO EVERYTHING.
MacBook Pro includes a solid-state drive that’s even faster than the previous generation, with sequential read speeds up to 3.1GB/s. The 15-inch model is the first available with a 2TB SSD — enough space to take even your biggest projects with you, without having to take an external drive. And its memory is faster than ever before. It all works together to help you boot up, launch multiple apps, or import huge files in a flash.
PROCESSORS THAT PROVIDE INCREDIBLE POWER. AND USE INCREDIBLY LITTLE.
With sixth-generation Intel Core processors, MacBook Pro delivers amazing performance — even when powering through the most pro-level processing jobs, like rendering 3D models and encoding video. At the same time, it can conserve energy when taking on lighter tasks, like browsing the web and checking email.
IMPRESSIVE ALL-DAY BATTERY LIFE.
The new MacBook Pro packs more performance into a thinner design, yet still provides all-day battery life — up to 10 hours for the 13-inch model and 10 hours for the 15-inch model.4 So you’re free to keep watching, gaming, and editing from wherever you are.
THE COOLEST THING YOU’LL NEVER SEE.
The thinner the notebook, the less space for cooling. So MacBook Pro incorporates innovations throughout the system that eliminate heat more efficiently than the previous generation — increasing airflow during intensive tasks like editing video, playing graphics-heavy games, and transferring huge files.
The new display in the MacBook Pro is the best ever in a Mac notebook. It features brighter LED backlighting and an increased contrast ratio, delivering deeper blacks and brighter whites. Its larger pixel aperture and variable refresh rate make it more power efficient than previous generations. And it’s the first Mac notebook to support wide color, for even more vibrant greens and reds. This ensures truer-to-life pictures with realistically vivid details, essential for graphic design, color grading, and editing.

MacBook Pro now features P3 color, which makes 25 percent more colors available than standard RGB — revealing a much broader range of greens and reds.
The speakers have been totally redesigned to provide as much as twice the dynamic range and up to 58 percent more volume, with two and a half times louder bass for maximum boom. And they’re connected directly to system power, enabling up to three times more peak power. So they make MacBook Pro the perfect choice for mixing a track on the fly, editing video on location, or enjoying a movie on the go.

Interacting with the new MacBook Pro is a better experience all around. The keyboard has been redesigned to include our new, second-generation butterfly mechanism — meticulously refined for greater comfort and responsiveness. And the Force Touch trackpad is significantly larger, giving your fingers more room to gesture and click.
Thunderbolt 3 combines ultra-high bandwidth with the ultra-versatility of the USB-C industry standard to create one revved-up universal port. It integrates data transfer, charging, and video output in a single connector, delivering up to 40 Gbps of throughput for twice the bandwidth of Thunderbolt 2. And both sizes of MacBook Pro are available with four ports, so you can do all that from either side. Existing devices are easily connected with a cable or adapter. And Thunderbolt 3 is reversible, so no matter how you plug in, it’s always right side up.

Simultaneously connect two 5K displays and two RAID systems to a 15-inch MacBook Pro with four Thunderbolt 3 ports to create a powerful workstation.
macOS is the operating system that powers every Mac. It’s engineered to take full advantage of the hardware and designed to be as easy to use as it is beautiful to look at. macOS includes an amazing collection of apps you’ll use — and love — every day. It also features iCloud and other innovative ways for your Mac, iOS devices, and Apple Watch to work together.