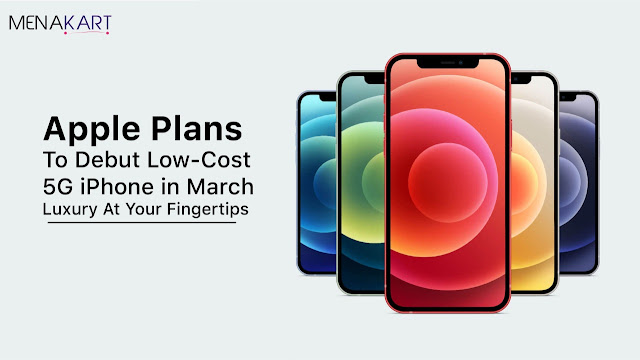 This March, a brand new low-cost 5G iPhone will be marching in the markets.

After a long wait, Apple is finally launching the first update to the iPhone SE model in March 2022. The all-new iPhone SE 3 will be featuring a fast processor, 5G network, and a better camera. But the most lucrative feature everyone is eyeing is the price drop. The iPhone SE 3 is rumoured to be the most affordable iPhone so far.

According to J.P. Morgan, the iPhone SE 3 has the potential to lure nearly 1.4 billion low-to mid-end Android phone users and about 300 million older iPhone model users.

Let's dig deeper into all the cool features of the iPhone SE 3.

· 5G Network- From the first day 5G technology was introduced, everyone is waiting to switch to the 5G network. And the good news is, according to Apple analyst Ming-Chi Kuo, Japanese blog Macotakara, and analyst Ross Young, the iPhone SE 3 will support 5G connectivity.

· Fast Processor- The major upgrade in any device is the processor, the faster, the better. Ditching the old A13 Bionic processor in the iPhone SE models, the iPhone SE 3 will be featuring Apple's fastest processor so far, the A15 Bionic chip, the same as the iPhone 13 line.

· Better Camera- Other than the fast processors and stunning designs, iPhones are known for their incredible cameras. According to MacRumors, the iPhone SE 3 will probably have the latest wide-angle camera from iPhone 13 line up. Or maybe it can feature only one main 12MP sensor with night mode, cinematic mode, and photographic styles.

· No MagSafe Support- Unfortunately, the iPhone SE 3 will seem to be missing an interesting Apple feature, MagSafe support. MagSafe is a magnetic technology to help properly align the iPhone on a wireless charger for easy attachment and faster charging. Though, it will continue to support Qi wireless charging as in other smartphones in the iPhone SE series.

· Affordable- The iPhone SE 3 will beat Apple's most affordable smartphone with 5G connectivity, the iPhone 12 mini (launched in 2020) in terms of affordability. As per the analyst Samik Chatterjee, the average starting price range can lie between $269 to $399.


Well, this is all we know about the brand-new iPhone SE 3, or rather say predicted. Though we can't say for sure, most of these predictions are going to be right, as it always happens. Let's cross our fingers for the main event in March. Though if you want to explore other options before settling for the iPhone SE 3, Menakart is just the place to start your Pre-Orders in coming weeks.

May 13, 2019
Hacking Work: Breaking Stupid Rules for Smart Results It would be so much easier to do great work if not for pointless bureaucracies, outdated technologies, and deeply irrational rules. These things are killing us. Frustrating? Hell, yes. But take heart. Today's top performers are taking matters into their own hands: bypassing sacred structures, using forbidden tools, and ignoring silly corporate edicts. In other words, they are hacking work to increase their efficiency and job satisfaction. In this groundbreaking book, consultant Bill Jensen and hacker Josh Klein reveal how to work smarter instead of harder. Once you learn how to hack work, you'll accomplish more in less time. You'll cut through red tape and circumvent stupid procedures. "Hacking Work" is about making the system work for you, so you can take control of your work load, increase your productivity, and help your company succeed - in spite of itself. This title is one of "Harvard Business
32 comments
Read more

October 25, 2017
Menakart - Your One Stop Online Shopping Site in UAE These days people find lesser and lesser time for home. People are busy with work, at office, both men and women. This is primarily the reason for the surge in online shopping dubai , online shopping, online shopping abu dhabi , and online shopping bahrain. Women too these days, even if they are not working are all busy looking after kids or working from home. This leaves people with meagre time for shopping for small things that one requires at home on a daily basis. But other than the lack of time there are other reasons that online shopping has taken over visits to malls? There are a few to name,  Saves Time Travelling to the mall, facing traffic while coming and back forth from the mall and home just to buy a juicer blender for some small kitchen cooking work? Doesn't sound right, correct? Online shopping saves time and the effort to run around in the mall. Just sitting at home on the couch after work you can order
45 comments
Read more