God Of War Ragnarök: Game of the Year Edition Released With New Weapons, Enemies And More….

December 06, 2022
God of War: Ragnarök game is out now! It's time for you to destroy enemies and chaos again in this highly anticipated sequel. Available at Menakart. Buy now at the Lowest price Online. https://www.menakart.com/god-of-war-ragnarok-playstation-5-ps5.html 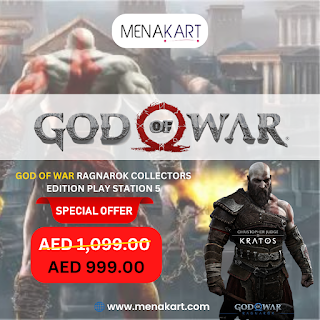 God of War: Ragnarök is a game released on November 9, 2022 developed by Santa Monica Studio and published by Sony Interactive Entertainment based on Norse mythology, set in ancient Scandinavia. The game marks the end of the Norse era of the series. The game has been compared to the works of American novelist and poet Neil Gaiman, such as American Gods and Stardust. It deals with Ragnarök, the crucial moment in Norse mythology that was predicted to occur when Kratos killed Baldur in God of War . The story was written by Marianne Krawczyk, who also worked on God of War II. The gameplay has been changed from the last game: Kratos now has a magical spear in addition to his double-chained blades and combat axe, and his shield has additional versatility thanks to distinct attacking and defensive capabilities. Some characters, including his son Atreus, aid in battle and have passive controllability. Furthermore, and for the first time in this series, there are a few story missions where the player gains complete control of Atreus. His gameplay is identical to Kratos', but he deploys his magic bow as a weapon. In comparison to the previous game, there are also more monster types and mini-bosses. Now let us explain how God of war – Ragnarök is ruling the charts !! The game succeeded well commercially, becoming the fastest-selling first-party PlayStation game ever with 5.1 million units sold in its first week. Ragnarök received overwhelmingly positive reviews from critics, who lauded it for its gameplay advancements over its predecessor as well as its plot, characters, graphics, and level design. Among several other nominations, it is currently a contender for Game of the Year at The Game Awards 2022. With 29,377 physical copies purchased, God of War Ragnarök on the PlayStation 5 ranked third among retail games during its first week of launch in Japan. With 11,260 physical copies sold, the PlayStation 4 edition was the sixth-best-selling retail game in the nation during the same week. Ragnarök reportedly sold more physical copies on its first day than any other God of War game did in its first week in the UK, with 82% of the total being sold on the PS5 and 18% on the PS4. Exact sales figures were not disclosed. The PS5 package accounted for 12% of PS5 sales. Ragnarök was the first cross-gen release in the series, which directly contributed to it having the biggest launch in the UK. It had a bigger debut than Call of Duty: Modern Warfare II, Elden Ring, and Pokémon Legends: Arceus. In terms of physical copies, it was the second biggest launch in the nation this year, behind FIFA 23. With 5.1 million units sold in its first week, Ragnarök became the first PlayStation first-party game to break the quickest sales record. Best reviews for God of War - Ragnarök: The Telegraph 5 Start Video Games Chronicle 5 Start GameSpot 9/10 Perks for God of War Series fanbase: #1 “That” Boss Fight - Soon as Santa Monica Studio announced back in 2015 that their next game would be God of War and that it will take place in the Norse realm – everyone has been looking forward to a throwdown with a certain hammer-wielding God. Quite smartly, Santa Monica withheld that boss fight in the 2018 game, saving it for the eventual sequel which arrives a week from now. #2 Freya’s Vengeance - The climactic boss battle between Kratos and Atreus and Baldur, the son of Freya and Odin, was one of the 2018 game's key moments. In the end, the fight ended in the pair's favour, and as Baldur tried to kill Freya, Kratos broke the cycle by snapping Baldur's neck. #3 New Combat Elements - Weapons of war – The Leviathan Axe, Blades of Chaos, and Guardian Shield. We've talked a lot about the game's many intriguing plot components, but the fighting is probably the main factor that has kept players loyal to the series for so long. And you will witness some really fascinating weapons ever introduced. YOU JUST CAN’T MISS THIS……!!!!! Find exclusive offers and explore gaming world with one of UAE Most trusted e-commerce site: www.menakart.com BUY NOW : God of War Ragnarok - Playstation 5 (PS5) (menakart.com) · Free Delivery above AED 100 in UAE · Online support · Cash on Delivery & ships in 24 hours