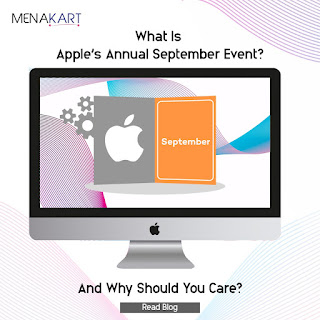 What Is Apple’s Annual September Event, And Why Should You Care?

Apple's upcoming fall event in September has become the talk of the town. Rightfully so, as people have eagerly anticipated this year's event after Apple unveiled what new products it has in store for us. All indications foretell that the event will be one of the biggest Apple hardware launches in the past few decades, and the reasons you shouldn't miss it are plenty.

What Is Apple’s Annual September Event All About?

The annual event is held on a large scale in a theatre, where the industry professionals and media are invited to witness and hear about all the new launches. In addition, the event is streamed online, and people from all over the world can experience it through their screens.

Apple's guest keynote speakers at these events are also a major highlight, as they provide a learning experience for industry professionals and the general public alike.

A Glimpse of Apple’s Past Events & Launches

Apple conducted two big events last year - one for the launch of the iPhone 12, iPad Air, and new Apple watches, and the other focused on launching the new M1 MacBook series.

The previous Apple event, “Spring Loaded”, took place on 20th April in 2021. Despite being completely virtual, nothing stopped Apple from putting on a spectacular show. This year the show is likely to continue virtually.

Apple included an Augmented Reality teaser in its 2020 invitations, which hinted at the launch of its M1 MacBook series last year. This year, Apple is introducing its new 14 and 16-inch MacBook Pro models and Mac Mini.

The Most Anticipated Apple Launches

The yearly iPhone launch in the Apple fall event is where all the eyes are at. This year, Apple is releasing the iPhone 13 that promises big improvements compared to the previous models. In addition, AirPods 3 will see some incremental updates as well.

Moreover, the launch of iPad mini, Apple Watch Series 7, AirPods, and the new MacBook Pro series is next in line and is expected to display some interestingly positive changes.

Why Should You Care?

Apple hosts events all year round to launch various products and updates. However, the highlight is the annual September event as Apple launches its most popular and profitable product, the iPhone.

The launch of the M1 MacBook Air, 13-inch MacBook Pro, and Mac mini in Apple's “One More Thing” event translated into a significant 23% rise in sales, a record-high since January 2021.

Therefore, investors all around the globe are eagerly anticipating this event. The Apple stocks generally start going up after a month of the product launches, benefiting them the most.

Moreover, the iPhone 13 is expected to show some major camera, display, and battery life improvements. Multiple sources claim that Apple will be revamping the Apple Watch Series 7, the curtains to be raised in the upcoming fall event.

Although the exact date is yet to be announced, the event's excitement has stirred up many predictions and leaks about the date of the event. With some interesting changes about to be introduced in iPad mini and AirPods, Apple still has a lot to unveil in the upcoming fall event. So, stick around to find out more.

May 13, 2019
Hacking Work: Breaking Stupid Rules for Smart Results It would be so much easier to do great work if not for pointless bureaucracies, outdated technologies, and deeply irrational rules. These things are killing us. Frustrating? Hell, yes. But take heart. Today's top performers are taking matters into their own hands: bypassing sacred structures, using forbidden tools, and ignoring silly corporate edicts. In other words, they are hacking work to increase their efficiency and job satisfaction. In this groundbreaking book, consultant Bill Jensen and hacker Josh Klein reveal how to work smarter instead of harder. Once you learn how to hack work, you'll accomplish more in less time. You'll cut through red tape and circumvent stupid procedures. "Hacking Work" is about making the system work for you, so you can take control of your work load, increase your productivity, and help your company succeed - in spite of itself. This title is one of "Harvard Business
37 comments
Read more